I move outside hugged by my clothes & shadows & the feeling that everyone knows what’s going on while I claw through mask & membrane and keep coming up empty. Perhaps everyone is empty. Perhaps everyone is real. Perhaps real and empty are the same thing. Somewhere up high airplanes disappear, leaving only extinguished fire trails, tiny slashes in the sky like parallel paper cuts behind a plate of glass … glass glass mirror, do you begin to see there is no face there in that shiny surface?

NOTHING TO BE DONE

Everyone is object but no one is whole, we are fragments of bodies and use ourselves as much as we’re being used by others. We’re in the vehicle but we’re not the driver. There’s no aim, no end, no direction, nor is there any comfort of “non-direction”—even dichotomy has become or has always been a lie … lie lie line … line becomes cross, cross becomes wheel, wheel becomes compass & the compass becomes a starry night, Van G. cut his ear off for a reason, even if I can’t remember it right now … nothing is whole, everything is collage …

As I walk through the canyon of the picture of life I know myself a nailnibbler, toothchipper, dustbiter and of course satisfaction is a lack of ambition but what if there’s just nothing to fucking aspire to anymore? Mist, dusk & threshold, we move within boundaries that set no limits and the only animals we see are wasps, rats and sparrows. And pigeons, who seem to know the rub, see the jig, get the con and decided to opt out, pecking indifferently at corn and sausages and cigarette butts and each other. The pigeon is the epitome of not-caring. I stare at them and wish them dead, every last innocent bastard. Innocence is not the absence of guilt, peace is not the absence of war, happiness is not the absence of desire. Or maybe it is. Etcetera.

I pass a beautiful woman wrapped in layers that she must feel protect her against something. As I pass her & look at her & imagine that she might be the one who graduates from husk to actuality & might instigate in me a desire or will or drive or necessity to evolve from body looking at mirror into person looking at himself in a mirror—as I pass her she moves her head an imperceptible inch or two to the left, looking nowhere in particular except obviously, heartbreakingly not at me, the greatest possible judgement in the smallest possible gesture. The face is seen, stretched, forgotten. All is fragment. All is broken because we broke it—to perceive ourselves as complete would entail seeing ourselves not as bodies (which can be enjoyed, directed, used) but as flesh, which harbours the nightmares of bone and nerve and sinew. Anatomy might be the worst thing that can happen to us. Two men in rags huddle under a dead tree.

It’s socially entirely acceptable to be your own worst enemy, this is even considered normal, but if you’re your own best friend, they’ll call you a narcissist. As we choke, we also breathe—transparent smudges on the windscreen of a completely, utterly, wholly, fully, despairingly & always indifferent god that we didn’t even believe in to begin with.

The pavement next to an office building is sliced open, shit-tubes sticking out of fractured concrete, air boxes clinging to glass concentration camps & squares become cubes become cages become headstones. Here lies a human, she was not a bad person. We think, but what do we know?

NOBODY EVER KNOWS ANYTHING 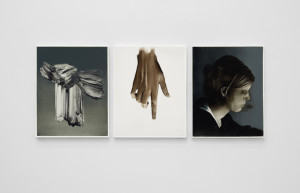 Some paintings from show “Humiliations”